skip to main | skip to sidebar

Blackface, and the Violence of Revulsion 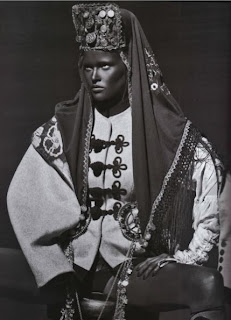 This post is supposed to be about the latest occurrences of blackface in fashion -- specifically, the 14-page editorial featuring Lara Stone, a white Dutch model, painted black and shot by Steven Klein for the October 2009 issue of French Vogue and also Carlos Diez's show at Madrid Fashion Week (September 22, 2009) in which models walked in blackface and, at times, with bared breasts.

There is indeed quite a lot to say about both events. To begin, fashion's seeming ineptness for dealing with race in ways that do not accommodate and/or supplement the already too long histories of racial objectification and commodification. We've discussed much of this history on Threadbared (see especially here, here, here, here, and here) already and will no doubt continue to, as there seems to be an inexhaustible amount of material. Second, these events (and others like it) are revealing of the ways in which multiculturalism and multiracialism --under the guise of postracialism, postmodernism, or just artistic edginess-- enables the continuation of white supremacy. For example, some are defending French Vogue for its provocativeness ("creative images . . . can sometimes [be] off-putting") and for its postracialism (arguing that it is "sort of beautiful in that having a person of one ethnic background look convincingly like she might be of another race shows the interconnectedness of us all"). But what is on display in French Vogue and on Diez's runway is not beautiful black bodies, but what Nirmal Puwar describes as "the universal empty point" that white female bodies are able to occupy precisely because their bodies are racially unmarked: "[Thus] they can play with the assigned particularity of ethnicized dress without suffering the 'violence of revulsion.'" 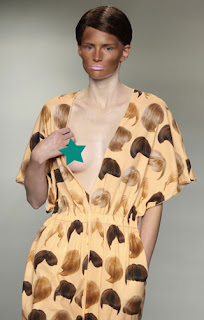 By this second order of "violence of revulsion," I mean the assault of racism and the assault of colonialism's traces on what was for me, until that moment of violence, a relatively mundane workday at home. Violently interrupting this scene of banality is not simply these images of racial arrogance, but my own visceral response of anger, exasperation, disappointment, and a feeling I can only describe as racism fatigue. Such images and their inevitable postmodern, postracial, freedom-of-artistic-expression discourses and apologists are not only tired, today they are tiring.

We are two clotheshorse academics who write, teach, and speak about the politics of fashion and beauty.

Minh-Ha T. Pham, based in New York City and San Francisco, shops sample sales with a keen and discerning eye. She writes about the ways in which national publics and polities are organized around traditional and new media that are increasingly shaped and limited by neoliberal discourses and policies. Focusing on the fashion media and the Vietnamese American media, both her projects are concerned with the complex and contradictory relations of communication technologies, consumerism, and capitalism.

Mimi Thi Nguyen, based outside of Chicago, scours thrift and vintage stores with reckless abandon. Situating her scholarly work within transnational feminist cultural studies, she writes about neoliberalism and humanitarianism, war and empire. A former zinester, Punk Planet columnist and Maximumrocknroll shitworker, she has also published on punk and queer subcultures.

Find out more about us! You can also write to threadbared dot 75 at gmail dot com.