skip to main | skip to sidebar

On The Politics of Vintage, Starting With a Series of Thoughtful Epigraphs Before I Begin My Own Ruminations on The Topic 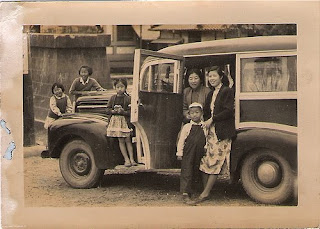 The following paragraphs are excerpts, authored by others, which might offer us (a collective us) an initial entry point into weighing the politics of vintage. The first comes to us from Catherine and her blog Renegade Bean, from a post called "Surrogate Memories From A Time Long Ago:"

I recently discovered a couple shops here in Taipei that sell vintage found photos. This topic really deserves a longer blog entry (and hopefully I'll have time to write one soon), but I find it very moving to see people who look like me doing normal things in time periods that I enjoy from a historical and aesthetic standpoint.

It's a rare thing. For example, I only recall Asian Americans being featured three times on as many seasons of "Mad Men": the "Oriental family" in Pete's office when he returned from his honeymoon, the waitress in a tight qipao and the (off-screen) Chinese driver that made Sally giggle. The series is one of my favorite TV shows, but it also reminds me that Asian Americans were marginalized (or worse) during the era it depicts. And, of course, depictions of Asians and Asian Americans in actual vintage US films are also problematic, to say the least.

I often find myself feeling very conflicted about my interest in vintage style. How can I enjoy things from an era when Asian Americans were repressed, socially and legally (as with the Japanese internment camps and the Chinese Exclusion Act), and when many Asian countries suffered sociopolitical violence that traumatized millions of people, including members of my family? But secondhand and vintage items have had an emotional resonance for me since I was very young and, though it's hard to explain, I can't imagine my life without them. This is more than a hobby for me -- it's part of my identity.

____________________
These questions and comments come from Gertie's New Blog For Better Vintage Sewing, on "Vintage Sewing and Gender Politics:"
I am a modern feminist gal who likes fashions from the fifties, a time period which [...] is not exactly known for being woman-friendly. How do I reconcile these contradictions?

Well, thinking this over brought up more questions than answers for me. For example:
So, to try to answer these questions, I thought about my relationship with vintage patterns. First of all, I like to sew 50's fashions so that I can make them wearable for me, in 2009. I shorten hemlines so they're more practical and modern. I make the waists wider so that they don't have to be worn with a girdle. I lower the bust darts so an unpadded bra can be worn. I mix current ready-to-wear blouses and shoes with vintage-style skirts. In other words, I don't dress as though I'm wearing a happy housewife costume. I think to most people, I look like a woman who is inspired by vintage fashion, but does not feel the need to look like Dita Von Teese or Betty Draper every day.

But why do I like these looks? I hope it’s not some sort of self-loathing that makes me want to wear a symbol of women’s oppression. I simply prefer the silhouette of vintage fashions as opposed to the current styles offered by pattern companies. I think the design is better and the lines are more flattering. If you want to oppress me, try to make me wear a pair of skinny jeans!

I should also note that I like vintage patterns because I’m interested in the historical and archival aspect of it. I think that sewing my way through Vogue's New Book for Better Sewing is connecting me to women of the past. Doing this project, and researching the evolution of home sewing (women's work, no doubt), is a way for me to honor the lives of women past (however painful) rather than pretending they didn't exist.

____________________
Footpath Zeitgeist is a rigorously critical fashion blog with a particular focus on hipsters and the phenomenon of what Mel calls stylism, "the belief that having a coherent and identifiable 'personal style' is the yardstick of chic." Mel doesn't hold back here as she deconstructs vintage as a practice of individuation and as a category of specialized consumption:

But within mainstream fashion systems, "vintage" styles are re-worked and brought back in a way that highlights their retro-styling and general 'old-schoolness'; according to this logic, there's no point wearing second-hand clothing if it could pass for something you bought new. (There are "designer recycle boutiques" that do specialise in second-hand clothing that looks new, but they tend to privilege 'designer labels' and 'pristine condition' rather than an overtly anachronistic look.) And 'vintage' transmutes the rituals and skills of personalisation that surround clothing in the second-hand fashion system into a hazier idea of "personal creativity." This happens both in the retail environment and in fashion journalism.

We all know that "vintage" is a much-abused term because it enables shops to ask large amounts of money for garments that are simply pre-worn - or even merely retro-styled. Owners of "vintage stores" openly buy up bulk clothing from flea markets, op-shops, garage sales and estate sales, carefully curating them and then marking the prices up vastly. These are the people who rock up at your Camberwell Market stall at 7am and go through your car boot with a torch before you've even unpacked. You'll also see them at Savers with shopping trolleys piled high.

This is starting to happen in high-street retailers too as they realise the market for 'vintage'. For instance, Sportsgirl is currently selling second-hand cowboy boots for something like $150, but rather than the motley collection of items you fossick through at a second-hand store, they've been carefully picked to look similar. What's more, they're displayed alongside a rack of dresses that are marked "vintage" but, similarly, have a look of extreme curatorship in order to make them 'match' both each other and the new goods elsewhere in the store.

It's easy to scorn people as dumb bunnies for buying their clothes this way, but while it's definitely a move away from the skill set that's required to fossick through heaps of old clothes and choose the right garments (the vintage clothing dealer has done all the hard sifting for you), there is still a certain feeling of pride and creativity that comes from saying, "It's vintage" when someone asks you where you got something. Here, "vintage" means, "I'm too individual to settle for mass-produced new clothes", even though the 'vintage' garment was almost certainly worn on a mass scale whenever it was new. More subtly, it also means, "I'm sophisticated enough to redeploy the styles of the past, not just wear whatever's new" and of course, "No, you cannot buy this item yourself, it's all mine."

I guess for me the question right now is: "How do we make clothing our own?"

We are two clotheshorse academics who write, teach, and speak about the politics of fashion and beauty.

Minh-Ha T. Pham, based in New York City and San Francisco, shops sample sales with a keen and discerning eye. She writes about the ways in which national publics and polities are organized around traditional and new media that are increasingly shaped and limited by neoliberal discourses and policies. Focusing on the fashion media and the Vietnamese American media, both her projects are concerned with the complex and contradictory relations of communication technologies, consumerism, and capitalism.

Mimi Thi Nguyen, based outside of Chicago, scours thrift and vintage stores with reckless abandon. Situating her scholarly work within transnational feminist cultural studies, she writes about neoliberalism and humanitarianism, war and empire. A former zinester, Punk Planet columnist and Maximumrocknroll shitworker, she has also published on punk and queer subcultures.

Find out more about us! You can also write to threadbared dot 75 at gmail dot com.